What are the impacts of armed conflict on a country’s economy? Most academics and conflict experts tend to stress the negative economic impact of armed conflict and civil war, what with the disruption of production and trade as well as the plundering and extortion of civilians.

Despite this widespread consensus, a few countries that have had long and protracted conflicts do not seem to have been very affected economically. Colombia is a prime example, with its almost unbroken history of economic growth and strong agricultural production coexisting with world-record levels of forced displacement, a product of its 50 year-old conflict.

Is it possible to conceive reverse causation as a potential explanation, with violence at times actually being a means for capital accumulation? What role does the agro-industrial sector play in Colombia’s armed conflict? The community of Las Pavas that I visited last week is a good starting point to explore these questions…

After a five day visit in El Guayabo, my colleague Britta and I are headed to Las Pavas, an estate in the municipality of El Peñon, in the department Bolívar, that grasped international attention in 2009 after The Observer reported that the cosmetics giant The Body Shop was buying 90% of its “palm oil from an organization that pushed for the eviction of peasant families to develop a new plantation”.

On this 8-hour journey from Barranca, we venture even deeper into the Magdalena river, disembark in the small village of Regidor and hop onto two motorcycles that take us to Buenos Aires, the village that borders the haciendas of Las Pavas where peasants have had to take refuge for the past decade. On the way there, we pass what seems like endless fields of African palm (see photo above), a crop whose cultivation accelerated in Colombia from the 1990s onwards as a result of the increase in global demand for oils, fats and biofuel (you might consider the flip-side of ‘green energy’ after reading this blog post…). 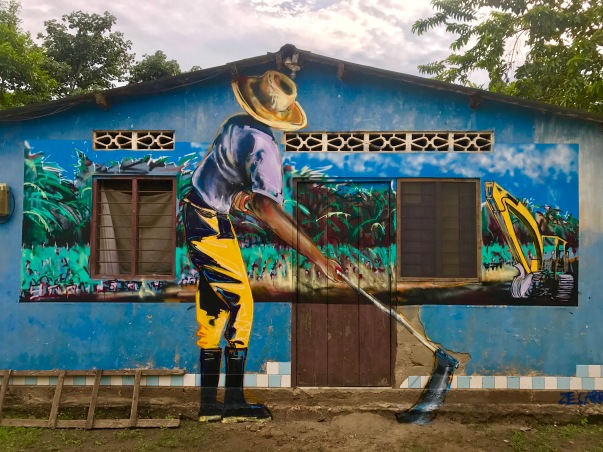 Although Colombia is now the 5th largest producer of palm oil in the world and the largest producer in Latin America, its palm oil industry is highly controversial, as it has been systematically linked to forced displacement and violent paramilitary activity. The high investment cost of palm oil due to the crop’s late maturation period and large infrastructure, maintenance and production costs make this agribusiness prohibitive to small peasants. This gives large palm oil companies incentives to cultivate large amounts of land in order to absorb their initial investment and, in the Colombian context of weak rule of law and a highly corrupt justice system, to forcibly displace farmers from their land.

We are warmly greeted by one of the leaders of the community, Don Misael Payares, an inspirational farmer from this remote little village whose leadership in the current territorial dispute led him to win the National Peace Prize in 2013. He immediately tells us how grateful he is for our accompaniment, giving me some further reassurance as to the importance and relevance of our work.

Like in El Guayabo, I am in complete awe at the stamina of this community. Here’s their story:

In 1983, Jesús Emilio Escobar, uncle and alleged front man of the infamous drug baron Pablo Escobar, bought the estates of Las Pavas and settled on the land. In the early 1990s, as Pablo Escobar’s empire, the ‘Medellín cartel’, was crumbling, Jesús Escobar abandoned the land and fled to Costa Rica.

A few years later, a group of peasants from the neighboring village Buenos Aires settled on the abandoned estate of Las Pavas, making productive use of it, until a paramilitary group sent by Jesús Escobar (who had, in the mean time, put up the land for sale) forcibly displaced them from the land in 2003.

Under the impetus of the paramilitary demobilization process, the peasants gradually started resettling their land in 2005. They also initiated a judicial process with the land agency INCODER (Instituto Colombiano de Desarrollo Rural in Spanish) to claim ownership of the land under article 52 of 1994 Law 160, which stipulates the conditions for the legal acquisition of abandoned land (more than a couple of years of abandonment of the owner and the productive use of the land by the new occupiers).

Despite the land reform program that the INCODER initiated after assessing that all the conditions were met, Escobar returned in 2006 with a group of armed men to expulse the farmers once again from their land and hand it over to the new buyer, an agro-industrial consortium (including the Body Shop’s former palm oil supplier, the Daabon Group).

In an act of defiance, the peasants returned to Las Pavas in 2009, only to be evicted by the police on demand of the palm oil company that claimed they invaded private property. The slow and stuttering justice system finally declared the eviction illegal in 2011, through a ruling of Colombia’s Constitutional Court, and the INCODER revoked the company’s property rights over the entire property in 2012. A 2015 ruling by Colombia’s highest administrative court, the Consejo de Estado, endorsed the INCODER’s decision – yet another victory for the peasants’ case.

Unfortunately, the story does not end here. The palm oil company completely disregarded the INCODER’s decision. Up until today, it continues doing business as usual and has intensified harassment against the peasant community, in total impunity, burning down crops and houses, destroying infrastructure, poisoning livestock and sending death threats to communities’ leaders (including our dear host Don Misael, who has been shadowed by a State-sponsored bodyguard for the past four years).

In the mean time, the case of Las Pavas has been recognized nationally as an emblematic case of historic land disputes and the peasant community has been given special protective status as victims of the armed conflict. However, the status quo prevails and the community continues struggling daily to make ends meet with the little piece of land they have been left with, suffocating from the ever-expanding palm plantations surrounding them.

A visit to José’s plot, a half-hour walk from the main camp in Las Pavas – off the grid both figuratively and literally (forget about State services here) – gives us a better understanding of the multidimensional hardships rural Colombia faces: the flagrant State abandonment of the countryside, the total absence of judicial expediency and crippled property rights system (symptomatic of the corrupt system that favors the rich and powerful), as well as the systematic use of paramilitary violence to silence agrarian activists all contribute to stacking the odds against Colombian peasants.

As if all of this wasn’t bad enough, these factors are compounded by the prospects of large capitalist gains in a State that clearly favors neoliberal development policies. Indeed, Colombia has fervently supported neoliberal economic policies since the 1990s, including a market-led land reform program that mostly benefited the agrarian elite. At the turn of the century, then president Alvaro Uribe, known for his hardliner stance towards the FARC, liberalized Colombia’s largest industries, coal and oil, and promoted large agro-industrial projects like the production of palm oil by including tax-free zones and subsidies for agribusinesses.

Attributing all forced displacement cases to violent expropriation techniques serving capitalist interests would be inaccurate; communities have also had to flee for their lives after being (justly or unjustly) accused of sympathizing with the guerrilla. However, there is an undeniable link between the two.

[A short parenthesis for the social-science inclined readers: I highly recommend reading the academic article by Gómez, Sánchez-Ayala and Vargas (2015) for those concerned with – apologies for the economics jargon – issues of statistical inference (i.e. the problem of generalizing from case studies and small-sample size analyses), causality (the causality–does–not–imply–correlation problem) and omitted variables (could there be other factors driving the observed correlations?). They present a very comprehensive review of the qualitative and quantitative evidence on the link between forced displacement and agricultural production and also provide new econometric evidence using subnational panel data.]

To sum up, the case of Las Pavas is a poignant reminder that violent forced displacement cannot simply be reduced to a ‘side-effect’ of armed conflict. Forced displacement, in the Colombian context, must also be understood as a tool for land-grabbing and capitalist enrichment. This perspective may explain why Colombia’s economic development has not only coexisted with armed conflict, but seems to have been supported by it (which goes against the widely accepted ‘reverse development’ argument according to which conflict harms economic development).

The Colombian armed conflict is therefore not just a conflict of political ideologies between the radical left and right (guerrilla and paramilitaries, respectively); it is also a conflict of social classes between the marginalized, rural peasantry and the landed elite that strives for capitalist gains in an increasingly globalized economy. With this in mind, this conflict, unfortunately, has no proximate end in sight…

The camp site in Las Pavas

Thanks for reading! You can check out my own blog here: www.peaceinsightcolombia.com