The taste of social injustice, especially when committed by the State, is bitter. The feeling of impotence is overpowering.

On Wednesday 13 December, local government and police forces engineered a coup in the rural communities of El Guayabo and Bella Unión, in the Colombian department of Santander. About one hundred policemen, half of them from the riot control unit, successfully evicted 9 peasant families from their land (affecting at least 40 people). These farmers now face a humanitarian crisis due to loss of their livelihoods.

The fight over the land goes back to 2002, when the present land claimant, son of the original landowner, sent paramilitaries to forcefully displace the occupiers who were exercising their right of possession over land abandoned by his father decades earlier (1994 Law 160 stipulates the conditions for the legal acquisition of abandoned land: more than a couple of years of abandonment by the owner and the productive use of the land by the new occupiers).

While the two communities managed to resist this paramilitary incursion, which later granted them the status of victims of the armed conflict by the State, the farmers have been confronted with threats, physical aggressions, destruction of private property and attempts at criminalization ever since (see one of my first blog articles on the criminalization of social leaders). Numerous complaints against the land claimant were filed, but no legal investigation was ever opened.

Like the first eviction attempt in 2013, led by a police inspector who was later arrested due to his uncovered links with paramilitaries, the eviction that occurred a few days ago was equally fraught with procedural irregularities. Here is an account of what happened that day…

Alerted by informal sources of the impending eviction, a delegation of national and international NGOs, including Britta and I from Peace Watch Switzerland, as well as journalists and the community’s lawyer arrived by boat in El Guayabo in the early morning.

Upon our arrival, the lawyer of the community, a well-respected former regional ombudsman and judge, convened a spontaneous meeting on one of the leader’s plot of land. There, he sought to reassure the dozens of anxious-looking farmers with the various legal arguments in their favor to halt the action.

Amongst those arguments he highlighted the much-repeated and indisputable fact, backed by legal archives, that part of the land claimed had been ruled as wasteland, so-called baldíos, in the late 1970s (an unfinished attempt by the national land agency, then called INCORA, to recognize the land as abandoned). Baldíos, State-owned by law, can only be handed over to poor, landless farmers by the national land agency (the ANT, Agencia Nacional de Tierras in Spanish) – wealthy individuals who have not lived a single day on the land do not qualify.

What is more, the exact delimitation of the claimant’s alleged 127 hectares of land has not yet been clarified. This did not, however, stop a local judge from emitting the unlawful eviction ruling that led to the injustices committed on 13 December, the day of the eviction.

Police blockade on the day of the eviction

“You know how things work here in Colombia,” explains a policeman quite unashamedly and, sadly, somewhat prophetically, “first the incident occurs, and then you can complain”.

Around 9.30am, over a hundred policemen and riot control units covered with body armor and armed with shotguns, assault rifles, teargas and rubber bullets disembarked from five high-speed motorboats. They soon formed a blockade on a public pathway, against the protest of the lawyer and the community who repeatedly called for due process to be respected.

Meanwhile, a group of five of us, farmers and international accompaniers, escaped through one of the fields and began treading through the dense pastures, circumventing the police force. After a half hour trek we finally reached the first plot of land that had already succumbed to total destruction by four of the land claimant’s workers, who slashed the entire banana plantation by machete and knocked down a wooden shack. With no prior warning or notification, the thirty year-old occupier of the land lost, in the span of thirty minutes, his entire economic livelihood. 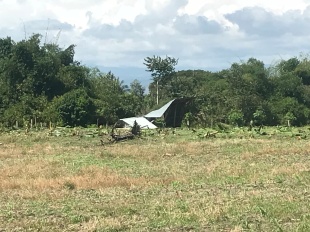 The seemingly interminable day gave way to escalating feelings of impotence amidst the grand disarray of the police operation: the distraught farmers, dehydrated under the scorching mid-day sun and flanked by the powerless lawyer, journalists and NGOs, saw their land being ransacked by smug-looking thugs in a clear act of humiliation and with the blessing and protection of the police force. The captain of the operation arrived that day with the clear intention of conducting a military-style eviction, in a disgraceful affront to the dignity of the community (this man already faces multiple criminal complaints for having momentarily arrested the lawyer and confiscated several ID cards without any valid reason).

After witnessing the plundering, we were notified that the four workers were headed towards the house of another peasant family, who had been subject to intense harassment and even physical aggression by the claimants’ men a few months earlier. This time they were unaccompanied by the police force, since their incursion into this piece of land, not included in the court order, was unequivocally illegal. Speeding towards the house on a tractor like a bunch of laughing hyenas, hacking down crops along the way, they suddenly stopped in their tracks when they realized they were being filmed by the NGOs (see video here). 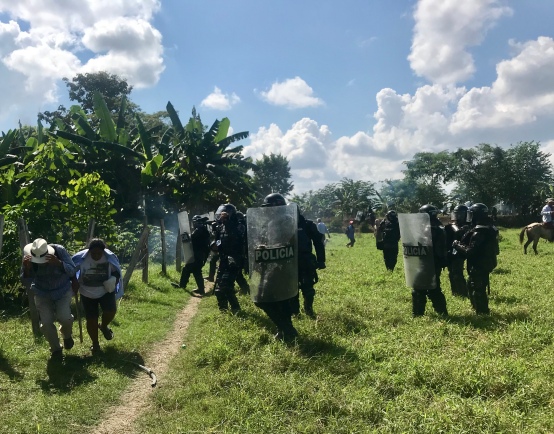 If not completely corrupted – claim which I cannot back up with hard evidence, the whole operation undeniably lacked, at the very least, due process and impartiality. The lawyer representing the community, in a phone interview I later conducted with him, declared that the standard eviction procedure had been completely disrespected and, therefore, that the eviction was carried out unlawfully. He added, “the State has violated its own norms; it’s as if we lived in a dictatorship.”

First and foremost, the community was never formally notified of the impending eviction. Moreover, the heavily armed police squad arrived as if preparing itself for an intense armed confrontation, and proceeded with the eviction without even establishing contact with the farmers concerned. Finally, in violation of article 308 of the 2012 Law 1564, the judge who emitted the judicial order was nowhere to be seen on the day of the eviction.

The local police inspector and personero (the equivalent of a local ombudsman), both responsible for authorizing the whole operation, only sheepishly appeared three hours after the eviction process started. Fumbling through the stacks of legal documents, the two civil servants tried to convince the lawyer – unsuccessfully – that the eviction was legal despite errors in some of the defendants’ names (see the video of this encounter here).

Last Wednesday’s incident is illustrative of the flagrant disconnect that exists between the post-conflict agenda of the State and the reality on the ground. Indeed, the first point of the peace agreement between the demobilized guerrilla group FARC (Fuerzas Armadas Revolucionarias de Colombia in Spanish) and the Colombian government spells out the key points of a comprehensive rural reform that seeks to address the historic land grievances responsible for the 50 year-old conflict.

With a strong emphasis on strengthening the small-scale farmer economy and family-run agriculture, the building blocks of the rural reform include: the creation of a Land Fundto be distributed to poor, landless farmers; a large-scale plan of land title formalization, aimed at providing legal and social certainty for small- and medium-sized properties; and an emphasis on food security, recognizing that many poor rural (and urban) areas of Colombia suffer from nutrition problems (you can find the full and revised peace agreement in English here and a summary here).

However, in a single, questionable judicial decision taken by a local judge acting out of his area of competency (recall that only the land agency can deliberate over State-owned wasteland), all of these points in the rural reform agenda were blatantly disregarded, to the great harm of the subsistence farming communities of El Guayabo and Bella Unión.

What is more, as State-recognized victims of the armed conflict, these peasant communities are protected by certain rights stipulated by Colombia’s Constitutional Court ruling T-239/13. Before the green light was given to carry out the eviction, the mayor should have ensured that these rights were respected by giving them, for example, an alternative piece of land to work on. Nevertheless, farmers are now facing renewed victimization.

What is clear is that none of the procedural kerfuffle would have arisen if property rights were clearly defined and the justice system functioned well. For example, why did the INCORA not finish annulling the ownership of the abandoned land (so-called extinción de dominio in Spanish) in the 1970s? While this question may seem irrelevant today (after all, why cry over spilled milk?), it is indicative of one of the root problems here, namely a weak property rights system and the all-pervasive corruption that affects all sectors of society, including bureaucrats.

The land claimant (right) and the police force, side by side

Rather than regarding corruption and weak State institutions as extraneous factors in Colombia’s land struggles, however, Wednesday’s State-led eviction of a victim peasant community is an important reminder of the inextricable link between institutional weakness, land grabbing and elite interests: Colombia’s ‘weak institutions’ such as its ill-defined property rights system have deliberately served economic interests of the Colombian elite, helping men like this land claimant enrich themselves at the expense of the most vulnerable sectors of society.

Thank you for reading! Some more video clips of the eviction here and here.